Jeremy has lived in Indiana his whole life. Born and raised in Fort Wayne, he graduated from Canterbury High School in 1995. He received a BS in Computer Engineering at Purdue in West Lafayette. Then, working full-time, he obtained his MBA from IPFW in 2007. While working in Indianapolis, Jeremy met his wife, Katie, on a blind date set up by mutual friends. They moved to Fort Wayne in 2011 and now have four preschool-age children: Joshua, Lydia, Hannah, and Grace.

Both Jeremy and Katie have lived overseas and enjoy traveling and spending time with family and friends. They attend Broadway Christian Church, where Katie teaches Sunday School, and Jeremy does audiovisual work with the worship team and services the IT needs of the church. 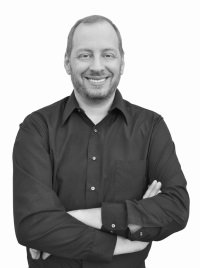 Zach is an Ohio native who took his first paid IT contracting job at age 14 (for his great uncle). Zach has 17 years’ experience as an IT professional serving organizations from education to health care. Zach received his BS in Peace Studies from Manchester College in North Manchester, Indiana. He and his wife, Wendy, live near Dayton, Ohio, with their two daughters.

Alex grew up in Columbus Indiana and started fixing computers as a teenager. He built websites, dabbled in programming, and did freelance IT work through college. After college, he was a youth pastor for three years. Following that, he changed careers and began to focus on IT. He has 2 years of experience as a client representative for an IT company, as well as 2 years of field tech experience. His goal is to pursue a career in Windows Server Management.

He has one son and has been married to his wife Kelly since 2014. His interests include volunteering at his local church, iOS programing, and spending time with his family.